Horizon Chase Turbo for the Nintendo Switch Review: Has Enough Fuel To Speed Into First Place!

I don’t usually play racing games as I’m more of a platformer or rhythm game person. However, that doesn’t mean that I hate racing games. Whenever I get to play one, it’s usually a pretty good time. When I got the chance to review Horizon Chase Turbo for AnyDay Reviews, I was very excited to play the game because it looked like a game that would be extremely refreshing to play! Does this game get a head start ahead of the crowd or will its tires fall flat?

Just like with my previous reviews, I will start this review off with me discussing the gameplay. This is because Horizon Chase Turbo doesn’t really have a story to it. I didn’t really find this surprising because racing games don’t really have stories. Then again, how could a racing game have a story? Anyways, the controls in Horizon Chase Turbo are pretty easy to use. You can use the ZR trigger to start the car, the ZL trigger to stop completely, and the Y button to boost with a gas can. You can use other buttons for those actions but I felt those buttons were the most comfortable to use with the set up the game is made for.

Horizon Chase Turbo is a racing game where you and 19 other racers have to race through laps in order to see who can make it to the finish line first! 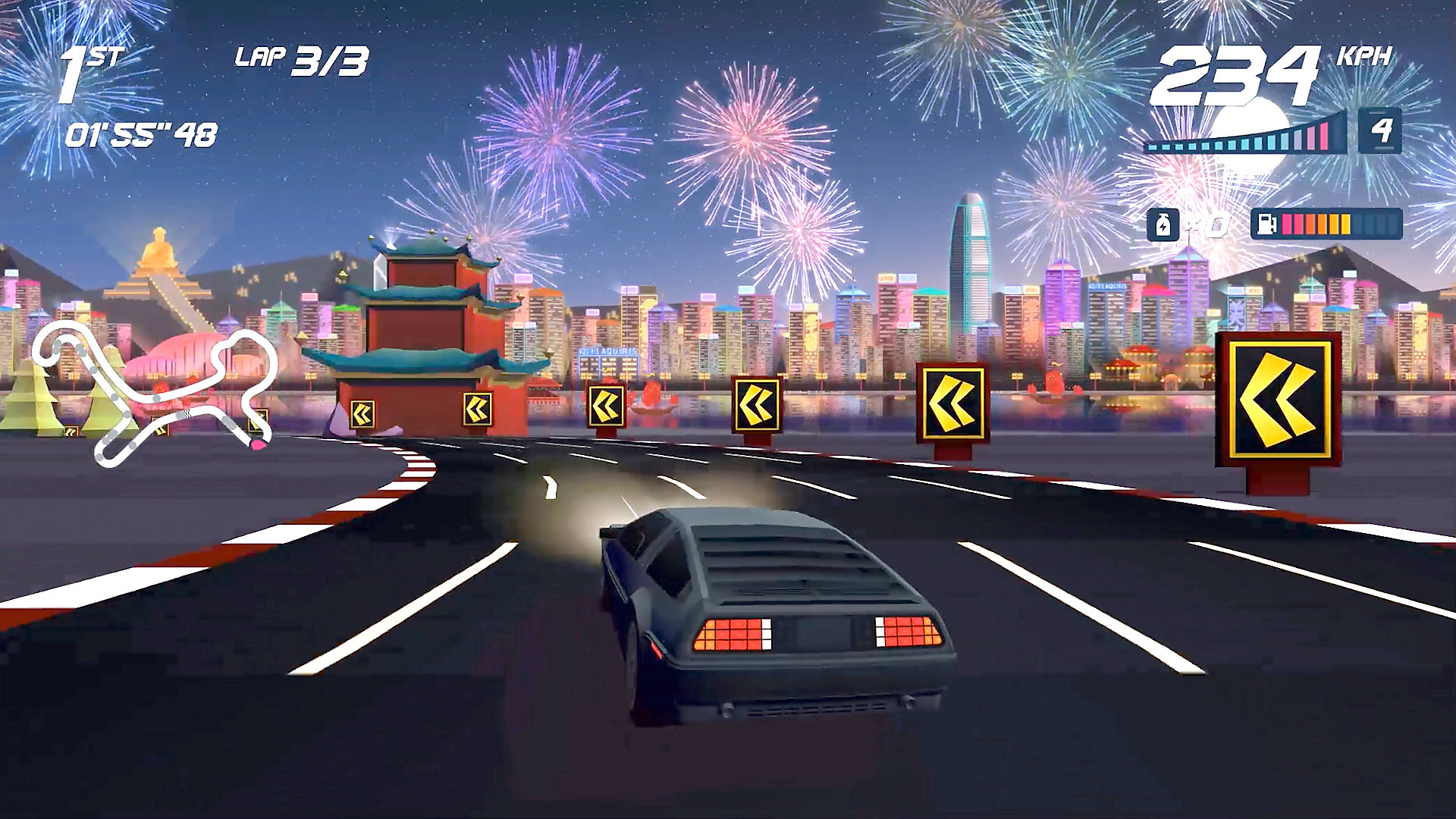 Before I talk about how the races work in this game, I’m gonna need to talk about the modes in the game since some aspects in the races only make sense in some modes. World Tour was the original mode in the mobile version where you unlock different places around the world and you have 3 sections to race through with 2 to 3 races in each one. Each race in World Tour gives you points to unlock more places in the mode. You can collect blue coins during these races for extra points and 100% completion. Tournament is the mode that’s kinda like Mario Kart where you race through 4 tracks and the position you are in once you finish the race depends on how many points you get. Whoever has the most points win! Playground is an online mode where new tracks are added from time to time for a limited time which adds new gimmicks. These tracks are usually just made for getting high scores and not really anything else. There’s also another mode after you complete World Tour.

Items are also in the game in the form of gas cans and fuel tanks. Gas cans are what you use for a boost forward. You usually start with 3 of these at the beginning of a race but some tracks will allow you to collect some of them on the track. The fuel tanks are used to refuel your car during a race. Some tracks are so short that you don’t need to collect them but some tracks are pretty long so you do not want to run out of fuel. Running out of fuel will result in your car coming to a complete stop making you have to restart the race.

Just like with most modern racing games, you will unlock cars throughout the game. This is usually through unlocking or completing cups in the World Tour mode. Each of these cars will usually have a different color to them and some are even different types of cars like vans. Just like any racing game, each car will have different stats such as their fuel or steering.

Speaking of stats, there is a way to upgrade your car’s stats by doing upgrade races in the World Tour mode. You will most likely unlock these when you unlock a new cup in the World Tour mode. Once you complete these, you get an option between 3 upgrades to use on all of your cars. These can range from better fuel to better speed when you do a nitro boost.

One last thing, if you were wondering while reading this “Where’s the multiplayer?”. Don’t you worry, any mode in the game can be played with up to 4 players. If you’re wondering how that changes the modes, it’s mostly just like this. If player 2 wins the races, it counts as the first player gaining progress to unlock more content.

Now that we are done talking about the gameplay, what did I think of it? Honestly, the gameplay in Horizon Chase Turbo is fantastic. Even though it’s inspired by titles like Top Gear and Outrun, Horizon Chase Turbo never feels like outdated or too inspired. The controls are great, each mode is extremely fun with World Tour easily being the best mode, and the collectathon aspect of the game surprisingly works despite it being such a weird concept. I honestly had no issues with the gameplay in this title. It’s that good!

Since we are done with the gameplay section of the review, let’s get to the graphics and performance! The graphics in Horizon Chase Turbo are pretty simple yet they look so good. The whole game gives off a whole Outrun feel with its art and it manages to look really good while going for that look. The backgrounds for each track are also really detailed and nice to look at! You can tell this was originally a mobile game but this is one of those exceptions where it looked good then and it looks better now.

Now, it’s time for the performance! I only ran into one glitch where I paused right when I passed the finish line and both the pause screen and the results screen showed up together. Other than that, the game was pretty functional. The game also ran pretty smoothly in docked mode at 60FPS. However, the game ran at 30FPS in handheld mode and would run even slower if I boosted too many times. The performance is pretty good despite those two issues.

Horizon Chase Turbo is the indie racer that I never knew I wanted so much. It’s a great time that contains fantastic gameplay, good graphics, great music, and a unique feel to it that improves on the formula of its inspirations. This isn’t just one of the best racers on Switch, it might be one of the best indies on Switch right by Celeste and Dead Cells. With the amount of content this game has, it’s certainly worth it’s $19.99 price tag. It’s good in single player, it’s good in multiplayer, it’s just a good game that anyone can enjoy!

Liked this review? Check out our review of ARK and Don’t Sink! If you like our content, consider dropping us a coffee on Ko-Fi! Thanks!

Reviewed by TheRayReviewer on the Nintendo Switch, game provided by Aquirus

Can’t Find what you’re looking for?